The original ASCE and IABSE logo 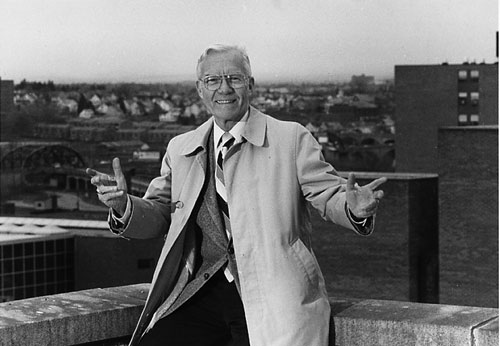 In 1969, the Joint Committee on Tall Buildings of the American Society of Civil Engineers (ASCE) and the International Association of Bridge and Structural Engineers (IABSE) formed at Lehigh University in Bethlehem, Pennsylvania, USA. The group was formed by Lynn S. Beedle, an engineering professor at Lehigh. Relating the story back to Structural Engineering International years later*, Beedle wrote:

“The afternoon of Friday, September 13th, 1968, at the 8th Congress of the IABSE in New York. Prof. H. Beer of Austria was summarizing the theme, ‘Tall Steel Buildings’, and I was struck by the significant tall building research he was describing. This research was not being coordinated or evaluated in a form useful to the designer. It spoke of the need for an international effort to bring information together.”

At a second IABSE meeting, this time in February 1969, Beedle submitted the idea to Elmer Timby, who had asked the U.S. Group of IABSE to suggest a topic they could “gather around” as a basis for more frequent exchanges with colleagues overseas. In September of that year, the idea of the Joint Committee was presented to IABSE, and ASCE approved it soon after.

“The need for the Joint Committee was more than just the desire to get together,” Beedle said. “It stemmed from things like the exploding urban population, creating an increased demand for tall buildings; the need for economy in construction; the frequent neglect of human factors at the expense of livability and the quality of life; the need for new research required in the field; and the necessity of establishing priorities for such reasons.”