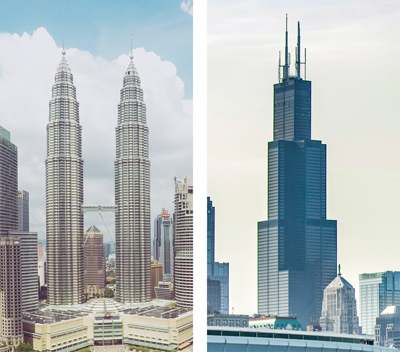 In 1996, CTBUH was rapidly propelled into the global public eye when the owners of the Petronas Towers, Kuala Lumpur, Malaysia, laid claim to the title of “World’s Tallest Building.” At risk was the title of Chicago’s iconic Sears (now Willis) Tower, the reigning champion since 1974. Well in advance of the meeting of the April 1996 Executive Committee in Chicago, the media began pounding on the door and lighting up the telephone lines – the Council recorded some 75 inquiries even before the announcement was made. Chairman Lynn S. Beedle was interviewed on “The Today Show” on the Sears rooftop. The pending decision was referenced on “The Tonight Show” with a joke from host Jay Leno – “All the Council does is, once every ten years, they look up in the sky and say, ‘yep, that’s the tallest!’”

The interest in the decision was very sincere, however. Beedle later recounted that a “closed-door” Executive Committee session, to which one member of the local press had been invited to join as the meeting adjourned, turned into an impromptu press conference when the doors opened. Dozens of TV cameras faced the committee, and a standing-room-only, emotional session ensued.

The decision – that the Petronas Towers were indeed the world’s new tallest building(s), measuring 451.9 meters to the tops of their decorative spires – was based on the re-affirmation of a standard the Council had held for some 60 years. The antennae atop Sears Tower, which took it to an ultimate height of 527 meters, did not count toward its “architectural” height, because the antennae were not considered a permanent part of the building. They could be (and have been, several times) altered to accommodate changes in telecommunications technology. The architectural height of Sears Tower was therefore determined to be the top of its flat roof, at 442.1 meters above its primary entrance. It was not a popular decision in Chicago, underscored by numerous outraged letters from elementary-school students around the area. Beedle even took it upon himself to visit one of those schools and explain the decision to 18 third-graders in suburban Hinsdale, who reportedly outdid the press with their rigorous interrogation.

Beedle said it best at the time, neatly capturing the role of the Council, and risks of making an objective, reasoned decision when much was at stake: “It was the culmination of a once-in-a-lifetime week in Chicago: Nationwide television. Front page headlines. Impassioned debates. Civic pride. Tradition. Innovation. And it was all topped off by the gatherings of friends and colleagues from around the world.”

Read more on the “Petronas vs. Sears” decision in this article by CTBUH Founder Lynn S. Beedle.”