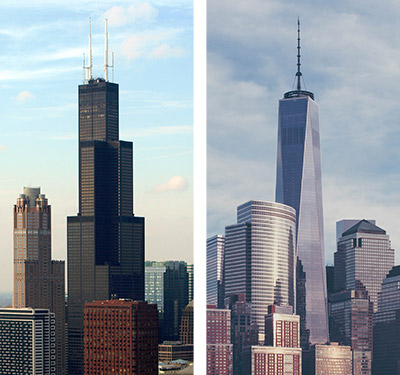 Willis Tower (left) lost its title as tallest building in North America upon the completion of One World Trade Center (right).

In what was unquestionably the biggest media moment in Council history, in 2013, Willis Tower lost a second title after having been displaced as the World’s Tallest Building in 1996, when CTBUH ruled that One World Trade Center, New York City, at 1,776 feet (541.3 meters) was the new tallest building in the United States and in North America. Recognizing that this would be a popular subject, dual press conferences were organized in New York City and Chicago, with then-CTBUH Chairman Timothy Johnson, Partner, NBBJ, taking the lead in the former and CTBUH CEO Antony Wood leading the latter.

At issue once again was how “height to architectural top” is defined by CTBUH. This time, the controversy was around the designation of the topmost structure above the roofline of the One World Trade Center building. While Willis Tower’s twin antennae had for decades been established as “functional-technical equipment,” so that taking the highest extent of its roof at 442.1 meters as the “architectural height” determined its ranking; a question over the status of One World Trade Center’s spire had emerged. Due to design changes that resulted in the removal of the radio dome (radome), a fiberglass-and-steel cladding around the mast at the top of the structure, it became unclear whether the structure was in fact a “spire” – a vertical element that completes the architectural expression of the building and is intended as permanent, or whether it was an “antenna” – a piece of functional-technical equipment that was subject to change. The spire-antenna distinction makes a difference in the measurement of “height to architectural top,” which includes spires but does not include antennae, signage, flag poles or other functional-technical equipment. Determining the topmost structure to be “functional-technical” potentially could have significantly impacted One World Trade Center’s ranking against other buildings, as the next obvious point to take a measurement of “architectural top” would have been the building’s parapet, at 1,368 feet (417 meters) – 408 feet (124.36 meters) lower than claimed.

The question was significant enough that the CTBUH Height Committee held a meeting in Chicago, at which the building’s architect, David Childs of Skidmore, Owings & Merrill, explained that the beacon at the top of the mast is comprised of a group of light-emitting diodes (LEDs) embedded in acrylic cylinders. Two reflectors revolve about the lights on a vertical axis, projecting the beams outwards as horizontal lines, reminiscent of a lighthouse. The height of the mast is also symbolically significant, in that it increases the total height of the building from the roof at 1,362 feet (415.1 meters) (the height of the original World Trade Center Tower 2) and from the top of its steel parapet at 1,368 feet (417 meters), the height of the original World Trade Center Tower 1). The ultimate height of 1,776 feet is intended to represent the year of the United States’ declaration of independence from Great Britain. This design intent reflected the building’s highly charged role as a national symbol, considering that the building replaced the twin towers demolished in the terrorist attacks of September 11, 2001. 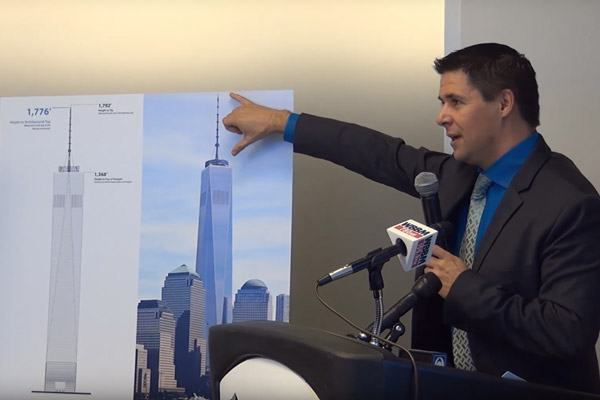 CTBUH Chief Executive Officer Antony Wood leads a press conference to announce that One World Trade Center would be the new tallest building in North America.

“I feel completely satisfied that this building achieved what it set out to do,” Childs said. “Beginning in 2005, we used the Council’s rules and designed around them. It’s an important statement for all of us to make.” The Height Committee, convinced by Childs’ presentation, proceeded with ratifying the building.

When this was announced, the Council offices were flooded with media requests for weeks. In addition to all major outlets carrying the news and many on-camera interviews with local and national TV stations, again the CTBUH found itself being referenced on late-night television comedy shows. A heated back-and-forth on all things New York and Chicago (with pizza slowly replacing tall buildings as the critical issue) took place between Jon Stewart, host of The Daily Show and Chicago mayor Rahm Emmanuel.

The media moment lifted the profile of the Council, delivering the biggest spike in traffic to its website in history, driving seven times the typical level of daily visits and expanding its influence well beyond previous boundaries. And the name of the organization was on the tongues of newscasters and reporters in some new, unexpected locations, even when those tongues were stuck in cheeks. To be fair, the fictional parallel organization to CTBUH is not Monty Python’s Ministry of Silly Walks, as some commentators joked, but the same comedy troupe’s Society for Putting Things on Top of Other Things.