Moment #7: Launch of the CTBUH Journal 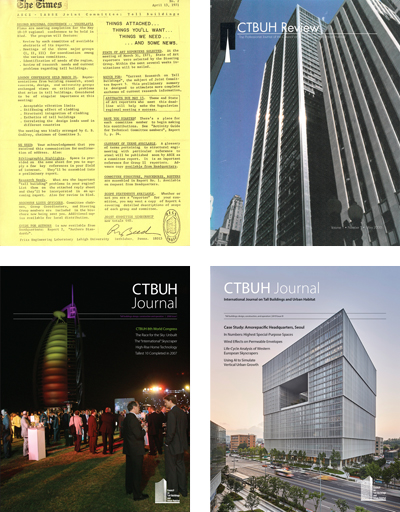 CTBUH has always endeavored to keep its members informed of developments in the tall building industry and within the organization itself. This took several forms in the early years, including the publication of “The Times,” a mailed newsletter, as early as 1970. It was not until 2000 that a professional journal that would be familiar to readers of the CTBUH Journal today—containing academic research papers as well as profiles of the Council’s people and work—emerged.

In May 2000, under the editorship of Mir M. Ali, volume 1, issue 1 of the CTBUH Review, subtitled “The Professional Journal of the Council on Tall Buildings and Urban Habitat,” was released. It contained a foreword by founder and then-director emeritus Lynn S. Beedle, “CTBUH: A Historical Sketch,” as well as research papers by familiar names such as Ken Yeang (“The Ecological (or Green) Approach to Design”) and former Chairman Shankar Nair, whose “Building Where They Said it Couldn’t Be Done” concerned the structural design of tall buildings on difficult sites along the Chicago River. It was available both in print and electronically on the CTBUH web site. The intention was to publish bi-annually, according to the “From the Editors” page, with all papers receiving a peer review and editors’ scan before publication.

The publication found its footing over several subsequent volumes. Calls for papers appeared in issues of The Times in 2001; Volume 1, No. 2 appeared in February 2001, featuring Kuala Lumpur’s Petronas Towers on the cover. The August 2002 edition of The Times (the last on record) announced a new editor, Brad Hinthorne.

“Issue No. 1” of the “newly updated” CTBUH Review in January 2003 was heralded as “a very big step for the Council” in a letter from Executive Director David Maola, as it would be the first to be physically printed and distributed (prior editions had been available online only). From this point, the Review began publishing twice a year. Volume 2 was released in Spring 2004 with a tribute to Beedle, who died in 2003. Volume 3 appears in Fall 2004, again as “CTBUH Review,” with a contemporaneous case study on Taipei 101, which had then become the world’s tallest building. In Summer 2006, CTBUH Review Issue 4 appeared, announcing the appointment of David Scott as chairman and profiling the under-design Burj Khalifa in Dubai and the International Commerce Centre in Hong Kong.

Consistent publication began in 2008 under the title of the CTBUH Journal, with three issues annually, finally becoming a quarterly in 2010, as it has remained to today. In 2019, changes are again afoot, as CTBUH advances into its 51st year and a significant digital transformation. We eagerly anticipate the next generation of our periodical publishing, and we hope you do, too.